Medicine for living in a crazy world.

Posted on June 4, 2013 by leslieatheartsong 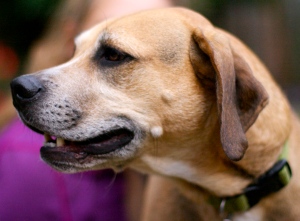 Some of you reading this know that I have a dog, Shams. If you have not heard my stories about Shams yet, then let me introduce you. Meet Shams-i-Tabriz, Shams for short (that’s an ‘a’ like “ahhhh”, not like a big pillowcase.) Anyway, you might be wondering how my pup got such a name. It came to me as I was driving down I-84 on my way to meet him. Worked it’s way into my brain like an earworm and I just could not shake it. I wasn’t sure what was inspiring me to name my dog after Rumi’s teacher although the thought did come, “hmmm, the teacher’s teacher?”…. If only I had known! A year later I understood. The whirling dervish had broadcast to me that he was here and I answered the call. Have I learned the lessons of love, compassion and patience that Shams has to teach me? I am working on it. It has not been easy but I truly have learned a lot about myself in the process of living with Shamsi.

My work with Shams has been a daily practice and much like my yoga and meditation it has made me go into myself in order to more deeply understand my reactions and a little more about how the human psyche works. I do want to give a little plug to my husband Carl who has also had to learn many of the lessons, to the dog trainers that we have worked with and especially to Dr. Chris Pachel of the Animal Behavior Clinic, who was able to see the good in me even as I struggled with this very challenging dog. He responded to my frustrations with compassion and care as well as some really needed advice to give up my obstinate resistance to medication and give Shams the meds that finally helped to reorganize his brain enough that he could start learning again.

Shams was surrendered to the Humane Society when he was 3 ½ years old (a little over 2 years ago). From his surrender papers, it appeared that he had been loved and well cared for and there is really no indication that he was abused or mistreated. Funny though, that I glossed over the repeated words on the pages, “very vocal” and “very nervous” and “afraid of loud noises”…. I was so enamored with something in him that I did not heed those warnings…. Hah! After the first few months, I understood why he had been given up and had to give credit for his previous people for keeping him for 3 years. I was not sure I could do it. But I committed myself to doing my best.

So, from the very beginning, it appears that Shams had some issues and I think that the people he lived with before simply ignored him as much as they could and put him outside when he was driving them crazy. He hadn’t been worked with, no leash training, no sit, stay, come…. It seems he was pretty much just allowed to bellow and tussle and be a pain in the ass. But as the surrender papers also said, he is a really “sweet and loving” boy and very friendly “once he trusts you”, he “loves to sleep under the covers” and is overall a “happy” dog.

But oh those times when something happened that surprised him (someone walked by outside) or there was a noise (did the mail truck stop at our mailbox again?) or we tried to go on a walk (OMG, a bird made a noise in that bush!) He was barking and thrashing at the windows of the house or was lurching, quivering, balking and knocking me over trying to get away from anything that moved or made a funny noise when we were outside. It was hell. I was stressed. And Shams and I (Carl too, really) were madly in love but having a really hard time dealing with each other.

Now, you might be thinking, this is an entertaining story but what does it have to do with yoga and why are you blogging about it? Here’s why. Shams is like the untrained mind and Sham’s relationships were like those of so many who have never been taught to pay attention: reactive, impulsive, abusive and scared. If Shams had been given more structure, some training and the right kind of love – the kind that was accepting, compassionate, kind and was willing to set boundaries and provide some limitations from the very beginning, I think that Shams may not have developed such outrageous behaviors that caused him (and all the people around him) so much grief. Yes, and yoga?….

Yes, yoga and meditation. How many of us learned yoga and meditation after many years of living in a mind that was untrained and a little (or a lot) unruly? How often did you see in yourself or do you see in others a reactivity that is not based on what is really happening now but on either past experience, misinterpretation or just a lack of experience that allows for discrimination and differentiation? How many relationships have suffered because you just did not know how to handle yourself in the situation and so you reacted as if something outside of you was causing you harm?

In the beginning, yoga and meditation are like the medication that finally allows the brain to settle and reorganize. As you progress, they continue to be the training for the mind so that the world begins to make more sense. From spending time in your inner world you get clearer about how you are reacting and you can begin to respond instead. The unruly mind becomes more relaxed and tame. Suddenly you begin to see options to behaviors that have not worked for you and to empowering choices you can make instead. Relationships begin to be less about being pleased by the other and more about being able to self soothe and remain calm, content and loving.

Shams is able to participate in training now that his brain is calmer. He still barks but often it is more of a loud “woof” instead of 3 alarm clamor. He still is a little bit of a pain in the ass but he is directable and responsive and even more loving, trusting and just damn cute. I feel that way about my brain too. It still makes noise, still gets scared, still gets caught up in old loops sometimes but I see it pretty quickly and can always find an option, a different choice that helps me (and the people around me) to suffer less. 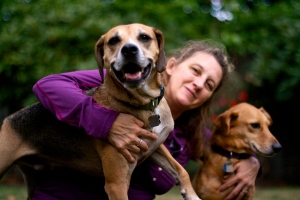 Yes, yoga and meditation; medicine for living in a crazy world.

(And who’s that other guy in the photo, you ask? That’s Sukha and another great story for another time!)

2 Responses to Medicine for living in a crazy world.